I love me some cinnamon rolls! These were super easy — I made the sweet dough the day before and proofed, shaped, rolled and sliced it and then let the rolls retard in the fridge overnight.  The next morning, I baked and glazed them — yummy!! 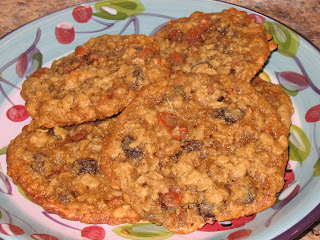 I have a real weakness for oatmeal cookies. Maybe it’s because I can tell myself that they aren’t really naughty to eat, but are actually very healthy, like teeny disc-shaped bowls of oatmeal. I found this recipe on a bag of Hershey’s Cinnamon Chips.

Texturewise, they resemble Oatmeal Scotchies — thin, delicate and chewy. I don’t love how fragile they are — not great for gift giving or even storing for that matter. They are fairly light tasting, particularly when you take into consideration what I consider an almost ungodly amount of butter. And I love the caramel-tinged cinnamon chips. But all in all, they’re really just an average tasting batch of oatmeal raisin cookies. It won’t stop us from polishing them off lightning fast, but I don’t think I will be making them again.

Last holiday season I picked up a bag of Hershey’s Cinnamon Chips (a seasonal offering in these parts) with this bread in mind. I’m embarrassed to report that it has taken me until now to get around to baking it. In any event, King Arthur Flour’s Easy Cinnamon Bread is a quirky little offering. Part yeast bread and part quick bread, it tastes like a not-too-sweet cinnamon coffee cake. The cinnamon chips are interesting too — I thought they’d be intense pellets of pure cinnamon flavor, but they are more like cinnamon-tinged butterscotch chips and lend pleasing bursts of spicy ooey-gooey goodness to the bread. I highly recommend having a thick slice, preferably toasted and buttered, alongside your morning coffee.

Because our house is not filled with nearly enough sugary stuff like lemon squares, chocolate chip cookies, Easter candy galore and such, I felt it was important to bake cinnamon rolls this morning. These differ from the rolls I made in December in that this dough is not quite as rich and eggy as the earlier dough. I drizzled the tops with a simple glaze. I made just a half batch — eight rolls — so I can still feel good about myself. I think I can still feel good about myself. Talk to me tomorrow.

I had a tremendous amount of dough left over from the Gigantor loaf of challah bread, so I decided to make cinnamon rolls. I kind of winged it on the recipe by referring to others, primarily one from Peter Reinhart’s Bread Baker’s Apprentice, for the shaping, filling, timing and glaze recipe. I think they turned out great, but now I have a huge pan of cinnamon rolls to eat! Thankfully, I also have a teenage son.

Snickerdoodles are essentially a sugar cookie rolled in cinnamon sugar. I’ve never made them before, but they seemed like they would be something pleasing in the sea of chocolate that is often my Christmas season. After perusing many different recipes I settled on this one, thanks in no small part to the fact that I would finally be able to use the cream of tartar in my pantry (When did I buy that? It appears that I’ve already used it at least once — for what??). I was a little leery of using shortening (all shortening, not even 1/2 shortening, 1/2 butter), but it turned out great. I suspect all butter would’ve spread too much, although I did see recipes that called for just that.

The snickerdoodles were light and crunchy but still had a little chewy tenderness in the center. They’d be lovely to have with a nice cup of tea if I ever manage to stop eating them while standing over my kitchen sink and actually sit down with a couple!