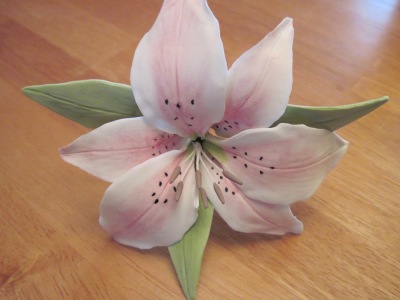 I recently spent four mornings under the tutelage of my good friend Evelyn, learning how to make flowers out of gum paste. We had a terrific group in our class and made lots of gerbera daisies, sweet peas, stargazer lilies, briar roses and stephanotis, plus ivy and lily leaves. This is the first Wilton class that I’ve taken in which I haven’t had to bake a cake and honestly, I was soooooo relieved as it’s been a crazy spring. In lieu of a finale cake, we were supposed to make a spray out of our finished flowers, but I just couldn’t wrap my brain around arranging them that morning. So here they are, in their unbound glory! 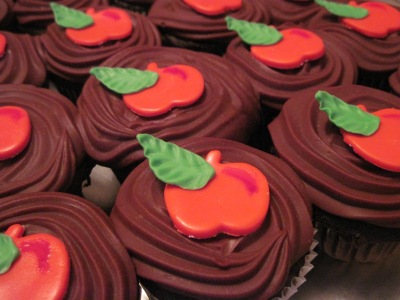 I made these cute cupcakes a few weeks ago, in celebration of the boys’ return to school. The cake itself was from a mix (Wilton-approved Duncan Hines Dark Chocolate Fudge) that I happened to have on hand. The icing was the Chocolate Frosting recipe from The America’s Test Kitchen Family Baking Book. I don’t know what the problem was with my icing recipes this summer — maybe it was just the increased warmth — but they typically did not turn out well at all. I remember it being a fairly cool day, inside and out, and still the icing turned out soupy, about the consistency of warm pudding, even after refrigerating the icing for several hours before piping. It was such a disappointment. You can see that the icing in the photo doesn’t look very sharp; I took this picture after chilling the iced cupcakes overnight. After about 15 minutes out of the fridge, the piped icing lost much of its definition.

For the toppers, I tinted some fondant with Americolor soft gel pastes — Super Red for the apples, and Leaf Green for the leaves. I really love this product — the colors turn out bright without using a ton of gel paste; I much prefer them to Wilton icing gel colors. I also painted on a little straight gel paste for some highlighting on the apples so they wouldn’t look quite so flat. I love how they turned out!

While I was making roller skate number 1 last week, my darling 13-year-old son sat alongside and crafted a fondant sneaker.  He’s amazing at modeling little objects — he’s also done a lot of work with Sculpey and modeling clay.

The bakery where I am interning recently took an order for a small tiered birthday cake and the customer requested a fondant roller skate topper.  So I’ve been working on one.  Or a few.

I did attempt number one just as a total first draft without consulting my boss for specifics; I just whipped it up in my kitchen in about half an hour.

This is roller skate number 1.  I also made a little bow to go on the laces, but it looked funny so I removed it. I brought it into work and the owner loved it!  She suggested that we just tweak it a little and use it.  Somehow that day I was uncharacteristically optimistic and told her, “Nah… I’ll make another one, better than the first!”  Easier said than done.  I made my second roller skate at the bakery and as I was lacking all the things I’m used to using — my usual fondant, tools, lighting, workspace… it all went pear-shaped.  And it took a long time to make that disaster too. Ugh.

Roller skate number 2.  It looks like a clown shoe. The brand of fondant we had at the bakery dries much faster than what I use at home, so the surface looked all slouchy and wrinkled.  Satin Ice, I don’t care how much the Cake Boss loves you… you made my afternoon a living hell.  The wheels are not attached because we removed them to dry (otherwise, they get kind of flat under the weight of the skate).  The one improvement I made was the addition of the tongue, which my boss had suggested. I hate, hate, HATE this one.

This weekend, I made two more skates at home.

This is number 3.  I liked it, although I thought it might be slightly too long for the 6-inch cake it’s topping and I wanted it to have a little more height.  I tried to get cute with my exacto-knife and made some stitching around the top collar and the tongue, but it ended up looking kind of meh. 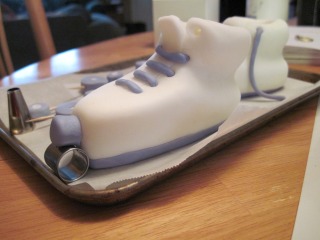 Number 4 — my favorite; we’ll see what my boss says.  I haven’t attached the laces yet because I am thinking of putting them on after the wheels are attached, so the laces drape down the proper distance.  The toe of this skate is a little more contoured and maybe slightly less cartoonish than numbers 1 and 3.  I also made a variety of wheel sizes for this one (although they can go on any of the skates, really).

It’s been an interesting and worthwhile learning experience, but I really hope I don’t have to do another one, at least not for this particular cake!