This week’s muffin is The Lean Green Bean’s Peanut Butter Banana Oat Muffins (recipe at link). I could once again point out my out of season use of Halloween paper liners, but I think that’s becoming tiresome. So I’m just going to say I’m going through a goth phase. Which will last until I run out of these black and white liners. And no longer.

Lately I’ve been pushing the envelope, trying to see how little sugar, or more specifically how little refined sugar, I can get away with when baking. I was really attracted to this recipe because its creator has the same curiosity. I also liked that there was added fiber in this recipe, in the form of whole wheat flour (white whole wheat in the original recipe) and oats. And I’m not going to lie; I found the fact that it would use up my two very ripe bananas and used other ingredients that I already had in my pantry very appealing.

Here are the specifics of what I did differently. I used unsalted butter (not specified in the recipe) and nonfat Chobani plain Greek yogurt (it’s what I had) rather than full fat or 2%. I used Teddie natural peanut butter rather than the more typical Jif or Skippy. This is really my first time baking with a natural peanut butter so I wasn’t sure whether using a peanut butter that didn’t contain all those emulsifiers would have an effect on the finished product (update: it seems fine). I didn’t have white whole wheat flour, but I did have a little bit of whole wheat flour that I was trying to use up so I ended up using about 25% whole wheat flour and 75% unbleached all-purpose flour instead of the white whole wheat. I added a pinch of salt because I noticed there was no salt listed among the ingredients (not sure if this might have been because the recipe creator used salted butter or perhaps felt there was ample sodium in the peanut butter). For chocolate chips, I used our “house” chips: Ghiradelli 60% Cacao Bittersweet Chocolate Chips.

Now here was my biggest change: originally I intended to substitute an equal amount of maple syrup for the brown sugar. I like avoiding refined sugar when practical and based on my very brief research on the interwebs, it appears that maple syrup has about the same amount of sweetness as brown sugar.  However, when I mashed my two medium bananas it seemed like I had a little over a cup instead of the half-cup that was specified in the recipe. The combined factors of the banana overage and the very, very ripe quality of the bananas made me think that the muffins might be overly sweet with the addition of even just a couple tablespoons of sweetening that the recipe suggests. So… I omitted the maple syrup altogether.

The result is a faintly sweet (almost flirting with savoriness) muffin. You can taste all the high points — banana, peanut butter, cinnamon, dark chocolate chips. It’s really lovely. The only criticism I might have is that my oats (old-fashioned whole oats, store brand) are a bit coarse and chewy. This doesn’t ordinarily bother me at all in other baked goods, but I found myself wondering what was so chewy in there; it took me awhile to pinpoint the oats. I’m sure it has something to do with where my head is at today.  At any rate, I love these muffins. Next time I’ll give them a whirl with the omitted sweetening (although I will be using maple syrup instead of brown sugar). I don’t miss the sugar in my little experiment here but I’m not sure my family will agree. I’ll be happy to eat all of them myself should anyone complain! 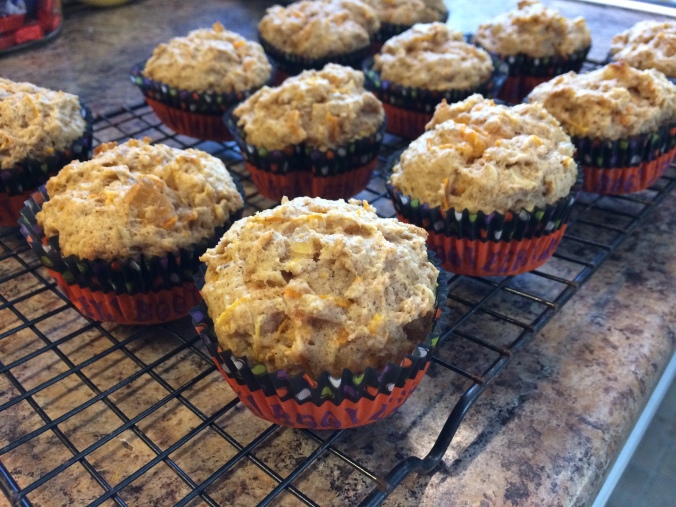 This week’s muffin is Melissa Clark’s Butternut Squash Oat Muffins with Candied Ginger (recipe at link). Please excuse the Halloween-themed muffin liners as I’m currently on a quest to use up all surplus seasonal baking supplies. Several years ago, I had a standing annual Halloween baking order and would snatch up every themed cupcake pan liner I could get my hands on at clearance sales. The Halloween bakes ended so even after years of diligently whittling away at them, I still have about 100 liners in various spooky patterns. Anyway…about the muffins.

Here are my changes: I used about half the maple syrup called for because (a) I’ve been trying to cut down on my sugar consumption and I used the full amount of brown sugar listed (plus the ginger is candied and coated in white sugar), and more importantly, (b) I only had about 2 tablespoons of syrup left in the bottle. I compensated for the resulting deficit in wet ingredients by using a little more (plain) Greek nonfat yogurt — 5.3 ounces instead of 4 — this specific amount was because that was the size of the yogurt container I had and I didn’t really want to discard the little bit that was left. I omitted the lemon zest because I didn’t have any lemons.

I was faithful to the weight measurements (the volumetric measurements didn’t seem to jibe with the listed weights). I used my food processor to grate the butternut squash as I wasn’t into grating my fingertips this morning.

The muffins are perfect, with just a touch of sweetness… exactly what I was looking for. I’m not super fond of sweet muffins that resemble frosting-free cupcakes. I’m really looking forward to enjoying these with a hot cup of coffee tomorrow morning. ☕️