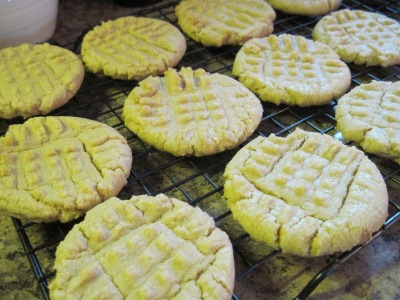 I’ve been trying to find this recipe online to avoid posting it myself, but have failed to find the exact version. Apparently, the recipe differs depending on which edition you have. My version comes from the 13th edition of The Fannie Farmer Cookbook, published in 1990. The proportions are double that of other editions and but it uses half the amount of salt. More noteworthy to me, and I’ll explain why, is that it calls for shortening rather than butter.

I really don’t like baking with shortening. However, we were snowbound (hey thanks, Mother Nature!) and had precious little butter in the house. And precious few sweets. My darling husband was having a powerful hunger for cookies and I remembered this recipe, one of the few I have that specifically calls for shortening. I used Spectrum Organic Shortening which, unlike Crisco, is non-hydrogenated. I forget why I originally purchased it, but I do remember thinking that if I absolutely had to use shortening, I would prefer to spend a little extra for something a wee bit “healthier.” Both my local Hannaford and Target carry Spectrum Organic Shortening. Maybe it’s willful thinking on my part, but when I use the non-hydrogenated shortening, I don’t notice that yucky waxy mouthfeel that is typical of shortening-based baked goods. I found these cookies really tasty, and I’m reasonably sure that wasn’t the desperation for sweets talking.
Peanut Butter Cookies
Adapted from The Fannie Farmer Cookbook (the weight conversions and the editorializing are my own)
1 cup (6.5 oz.) shortening
1 teaspoon vanilla
1 cup (7 oz.) granulated sugar
1 cup (8 oz.) light brown sugar
2 eggs, beaten
1 cup (9.5 oz.) smooth peanut butter
3 cups (12.75 oz.) all-purpose flour
1/8 teaspoon salt
2 teaspoons baking soda
Preheat the oven to 350°F and line a half sheet pan with parchment. In a mixing bowl, thoroughly cream the shortening, vanilla, and sugars. Add the eggs and beat well. Beat in the peanut butter. In a separate bowl, whisk together the flour, salt and baking soda; add to the peanut butter mixture, mixing until thoroughly combined. I used a cookie scoop (purple handled #40, which is 7/8 oz. for those who care about this sort of stuff) to measure the dough; place on the lined sheet pan. Press each cookie twice with the back of a fork to make the traditional crisscross design. Bake for 12 minutes (less if using a smaller portion of dough); cookies will be firm when lightly touched, but not brown. Makes about 4 dozen or so (I lost count of the trays going in and out of the oven and the cookies going in and out of mouths!) using the #40 scoop.

I meant to stick to my intention of blogging once a week, but last week, life got in the way. And a little storm some call Nemo, but which I prefer to refer to simply as the Blizzard of 2013. So here goes: the first of this week’s two posts to get me back up to speed.
Last Sunday was the Chinese New Year. It’s the Year of the Snake, a year that is particularly significant to me because my darling husband’s Chinese zodiac sign is the snake (this happy confluence means he has a birthday coming up that is a multiple of 12). But I digress.
When the kids were small, I didn’t really make a proper dessert for our Chinese New Year dinner celebration but kept it simple – fresh fruit, usually clementines. While I still give them clementines with their red envelopes, in recent years I added a simple dessert. Last year, I made Crème Caramel. This year, I decided to make another dessert that I learned in my Classic Pastry class at Johnson and Wales: Chocolate Pots de Crème. I’ve never even really eaten Pot de Crème; the day we made Crème Caramel, Pots de Crème and Crème Brulée in class, the desserts were assigned by team. My team made the Crème Brulée. While knowing how to make Crème Brulée is a fabulous life skill, this meant my team only got to eat the Crème Brulée. So I figured this would be an excellent opportunity to sample some!
I chose this recipe from David Lebovitz’s Ready for Dessert, found on the Culinate site. Baked custards and water baths used to intimidate me, but they really are fairly forgiving and quite simple. One of the terrific things about this particular recipe is that it uses ingredients I generally have in the house (for example, half and half rather than whole milk and heavy cream).
These were a big hit with my family. They would be best described as a chocolate egg custard (without being too eggy); my husband likened it to Chocolate Mousse, but without its lightness. I served them at room temperature without any garnish, but they would be wonderful with a dollop of Chantilly Cream. My discerning eater C. lamented that the recipe makes too little (six ramekins!), so I’m pretty certain I will be making these again. Happy Year of the Snake!

King Arthur Flour created this recipe as Herb & Onion Rolls; however, I’ve never made them with the dried minced onion as directed, but substitute dried minced garlic because I have a big ol’ bottle of that in my pantry. The garlic makes the house smell absolutely AWESOME so now I can’t imagine ever making them with onion.
I reserved the boiling water from making mashed potatoes a couple of nights before and mixed the dough by hand since my stand mixer has developed a pesky electrical problem and won’t mix.
I made the dough into cloverleaf rolls – for those of you who are attached at the hip to your scale as I am, each of the 36 little balls of dough should weigh about 18 grams to get the sections of your cloverleaf even and total out to 12 rolls. I haven’t yet sprinkled seeds on top of my rolls as suggested and this time I didn’t even brush them with melted butter when they came out of the oven (just to see what it would be like without) and they were delectable all the same.