It will probably come as no surprise that I am a devoted viewer of The Great British Bake-Off (or The Great British Baking Show, as it is inexplicably renamed in the United States). From time to time, a contestant will break down weeping over a catastrophic bake and  one of the hosts will need to come give him or her a pep talk. If I were on GBBO, this bake would be the one that broke me. I should be grateful to add that it is not too often that I am driven to such despair.

I made this one by request for my son Liam’s 23rd birthday. We typically do a lot of chocolate cakes for our summer of birthdays so it was very refreshing to be asked to do something fruity.

The recipe is from The America’s Test Kitchen Family Baking Book (the recipe is here.). In short, it’s a genoise sponge cake baked in one pan, then divided into 3 even layers, and filled with strawberry halves, strawberry puree and a cream cheese flavored whipped cream. With the exception of the dreaded genoise, it’s a pretty straightforward cake.

I am not certain whether I just psyched myself out or what, but the genoise totally kicked my ass. I ended up baking 2; the first, a failure, was a flat rubbery disc. The second was considerably better but I wasn’t optimistic when I put it in the oven as I was still finding unmixed pockets of flour in the batter, despite my best efforts. The finished genoise had decent height but dipped a bit in the center, resulting in an uneven layer — about 3/4″ tall on the outside edges but less (to nonexistent) in the center. That top third ended up becoming the middle layer when I assembled the cake, and the center wound up with double thick strawberry puree and whipped cream mixture where the center layer was absent, but it didn’t seem too cloying to eat. 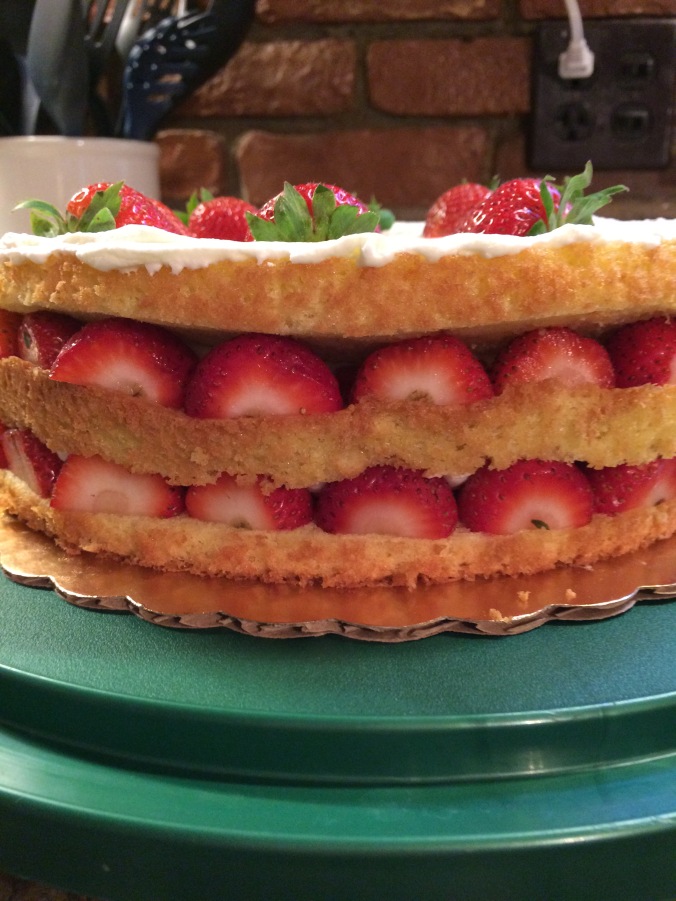 The cake ended up looking quite pretty and was quite tasty but I wouldn’t say it was one of my favorite cakes. Fortunately, no one was counting on me to pitch in eating it; my guys devoured it in 3 nights — kind of a record for speed. In hindsight, I think the results would have been just as pleasing with any white or yellow cake. And there would’ve been less wringing of hands and gnashing of teeth for the baker!